Designed like a wheel with the hub in front of Cinderella Castle, pathways spoke out across the 107 acres of the Magic Kingdom theme park and lead to these six lands:
1. Main Street, U.S.A. area
2. Adventureland area
3. Frontierland area
4. Liberty Square
5. Fantasyland area
6. Tomorrowland area

Travel through these lands and see how fantasy becomes reality when you learn how to be a pirate, match wits with funny monsters and conquer mountains. Get swept up in the spectacle of splendid parades and fireworks shows at Magic Kingdom theme park. It’s here that dreams come true for children of all ages.

Attractions at Magic Kingdom theme park consist of classic experiences that pay tribute to Walt Disney’s concepts and designs. Celebrate adventure, fantasy, the past, the future and the imagination. Use Disney’s FASTPASS system on popular attractions to reduce wait times.

Launch past the flashing lights of your space station into the soaring darkness of space! This classic Dark Ride dips and swerves as it rockets through the blackest reaches of the galaxy. Check the monitors as you exit for a glimpse of yourself in flight!

Wind through bayous, caves and watery byways in a log boat, past scenes with characters singing songs from the 1946 Disney film, Song of the South. And hold onto yer hats for the finale with a 52 1/2-foot drop!

Ride this rollicking runaway train that rushes through the gold-mining, Old West town of Tumbleweed in Frontierland. Beware when the rails go clackety-clack because your car’s about to run over treacherous terrain!

Climb aboard the Doom Buggy and ride through this ominous haunted house where a supernatural Ghost Host introduces you to his closest 999 dearly departed friends. Watch out for harrowing hitchhikers!

In this dazzling and innovative 3D movie, Mickey Mouse and Donald Duck sweep you into the scenes from classic Disney films as Donald chases the Sorcerer’s hat that starts all the trouble!

We need you, Space Ranger! Stop the Evil Emporer Zurg from stealing the Universe’s cystollic fusion cell supply. Climb aboard your own space cruiser to shoot targets and rack up points as you battle the robots in Zurg’s service. To infinity and beyond!

Sing along with the catchy melody on this fantastical boat ride that glides past the various continents of the world. Nearly 300 brightly costumed dolls sing and dance to bring the world’s cultures closer together in no small way.

Celebrate A Dream Come True Parade at Magic Kingdom theme park features a collection of classic Disney moments to delight Guests of all ages. Music, floats and many favorite Disney Characters make up this joyful procession down Main Street U.S.A.

Soar high in the sky with Dumbo over Magic Kingdom theme park. This classic ride is returning to Fantasyland—and will soon double in size when Dumbo is joined by his twin. Upon completion, Dumbo The Flying Elephant will be twice as big and twice the fun!

Spin around on this rocket ride as you soar high above Tomorrowland in a 2-person spaceship. Enjoy the spectacular view from orbit as you dip and rise ’round the colossal monument of orbs and spirals.

The Great Goofini takes Guests on a spiraling stunt plane adventure inspired by classic air shows. Here, you can enjoy a whimsical, roller coaster “flight” above the lively grounds of Storybook Circus in New Fantasyland.

Wander through this iconic fairytale fortress and take in this classic tale as it unfolds around you on murals. The castle serves as the formidable gateway to Fantasyland.

Come on down to this foot-stompin’, hand-clappin’ musical revue performed by a band of backwoods bears and their furry friends in Grizzly Hall theater. Give a big “Yeehaw!” and sing along with beary special musicians like the Five Bear Rugs!

Take aim at a whole posse of targets in this old-fashioned shooting gallery. Armed with an infrared rifle, you can shoot buzzards, tombstones and a scary tree in this Wild West ghost town. It’ll make a sharpshooter out of you!

The Hall Of Presidents

This 23-minute stage show features every American president, past and present, in a fascinating tribute that combines film, Audio-Animatronics® characters and storytelling to honor their legacies.

Ride a 1930s-style safari boat through the world’s most exotic, untamed rivers. Brave wild animals and zany goings-on in Asia, Africa and South America on this charming riverboat classic.

Cruise on the Rivers of America in this authentic 3-tiered paddlewheel steamship. Circle for a scenic, half-mile tour of Frontierland, Liberty Square and Tom Sawyer Island.

Take a whirl in a giant tea cup as the Dormouse occasionally pops up from the pot. Control how fast your cup spins at this mad-as-a-hatter Unbirthday Party in Wonderland!

The Magic Carpets of Aladdin

Fly over Agrabah on a magic carpet! Make the carpet rise and fall, pitch forward and back as it circles the Genie’s giant golden lamp. Keep an eye out for the spitting camels as you see Adventureland from above!

Climb aboard a classic vehicle such as a fire engine, omnibus, horseless carriage or trolley and be whisked down Main Street, U.S.A., in nostalgic grandeur.

The Many Adventures of Winnie the Pooh

Embark on a jolly journey during a very blustery day in the Hundred Acre Wood aboard one of Pooh’s Hunny Pots. Join your friends to save Piglet from the Floody Place Falls!

It’s a monstrous laugh a minute in this comedy show hosted on a digital stage by Monster of Ceremonies Mike Wazowski. This interactive spectacle even lets you text message your own jokes as suggestions.

On this sweeping, high-flying ride, swoop from the Darling children’s home to far-off Never Land in a pirate galleon! Drift over the twinkling London skyline and Mermaid Lagoon to Captain Hook’s ship.

Pirates of the Caribbean

Adopt a pirate’s life as you venture into legendary territory on one of the most classic Magic Kingdom rides of all time. Board yer vessel and drop 14 feet over a waterfall into treasure-filled caves! Then float through a town where pirates pillage and Captain Jack Sparrow hides from pursuers. Yo ho, yo ho!

Seize your courage and enter the Evil Queen’s shadowy world on this darkened ride that’s not for the fearful. See who will ultimately be the fairest in the land. But don’t be tempted by the shiny apple!

Sorcerers of the Magic Kingdom 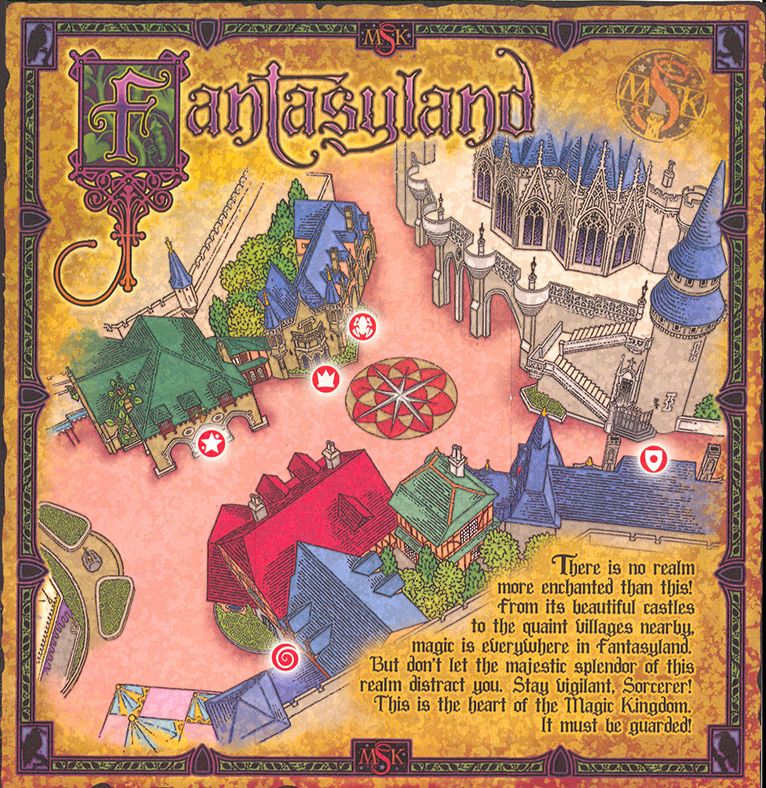 Enter the Galactic Federation Prisoner Transportation Center for an outlandish adventure with everyone’s favorite agent of chaos! When Stitch escapes, he wreaks havoc in the crowd using water, smells and other surprises during this wacky experience.

Inspired by the 1960 film, this fascinating treehouse is home to the South Seas-shipwrecked Swiss Family Robinson. Climb into the heights of this towering abode and survey the surrounding jungle.

Inspired by the famous novels of Mark Twain, this lushly landscaped outdoor playground is where children of all ages can scamper and climb in the rugged terrain while parents relax in a rustic atmosphere.

Experience the glory of the Indianapolis Motor Speedway as you drive your own Indy 500-style race car on a guided track all the way to the Victory Circle. Or just ride along!

Join Mickey Mouse for a magical meet-and-greet backstage at Town Square Theater! Brimming with enchanting details, this beautifully reimagined theater is also the temporary home for the Disney Princess meet-and-greet.

Presented in a revolving theater, this show designed by Walt himself tells the story of the evolution of technology in the 20th century. Open seasonally.

Recently re-imagined and refurbished to match the innovation of its Disneyland Park counterpart in Southern California, this musical revue showcases a colorful menagerie of flowers, tikis and Audio-Animatronic birds.

With the largest expansion in the history of Magic Kingdom theme park, Fantasyland will nearly double in size! The initial phases of New Fantasyland opened in the spring of 2012.

Discover more immersive enchantment—and more interactive experiences—at New Fantasyland, the largest expansion in Magic Kingdom history! Upon completion, Fantasyland will nearly double in size—so you can look forward to extensive additions of fantasy and fun for the entire family.

Step right up to the classic American circus! Inspired by the Disney animated feature Dumbo, Storybook Circus transports Guests to another era—a period in time when the colorful big-top tents attracted audiences from far and wide with astonishing stunts, majestic animals and spectacular entertainment.

You can delight in the following Storybook Circus attractions:

Take to the sky with The Great Goofini on spiraling stunt plane adventure high above the Storybook Circus grounds.

Soar high above Storybook Circus with Dumbo on a ride that puts a new twist on an old favorite—and offers twice the fun!
Fantasyland Station Delight in the newest addition to Walt Disney World Railroad!

Storybook Circus is filled with multicolored circus tents and other nods to Dumbo—so you can feel like you’re a part of this cherished film.

Meet some of your favorite Disney princesses in Fantasyland Forest, an area inspired by the Disney films The Little Mermaid and Beauty and the Beast. You’ll find interactive attractions, 2 majestic castles, a quaint village, waterfalls and more—all nestled within the lush foliage of Fantasyland Forest.

Labeled as the Gateway to the Caribbean or Riviera of America, Riviera Beach is a unique vacation city for those looking to live the high life in Florida.